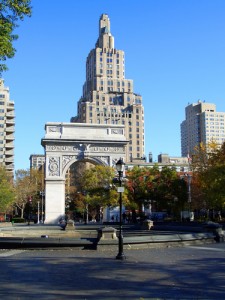 Greenwich Village or “The Village” is a residential neighborhood situated in New York City, Lower Manhattan. The district is mainly inhabited by upper middle class individuals. From the 19th to the 20th century, Greenwich Village was known as a bohemian capital, the Beat movement’s birthplace and an artists’ haven. The community’s attractive character caused its commercialization and gentrification. The Greenwich Village is bordered by 14th Street, Houston Street, Hudson River and Broadway. Also, the district is centered around New York University and Washington Square. The area is surrounded by neighborhoods like Chelsea, SoHo, NoHo and East Village.

Greenwich Village hasn’t lost its historic character and charm. As you pass by 6th Avenue and 14th Street, you can see how the grid system of Manhattan stops and its place is taken by narrow and crooked lanes. That’s how you know you’re in Greenwich Village. The oldest area in the neighborhood is the Meatpacking District, featuring cobblestone streets and industrial buildings. It is filled with bars and restaurants and the skyline is dominated by the Gansevoort Hotel. The entertainment locales and the residential buildings in the Meatpacking district highlight the New York flavor of the neighborhood. The atmosphere is completed by off-Broadway theaters, trendy cafés and jazz locales.

Greenwich Village used to be a rural hamlet, separated from the actual New York City. Throughout the years, it grew to be the most interesting areas in the lower Manhattan. In the 1950s, the section was filled with hipsters, writers, artists, poets and writers, creating a real precursor for the hippie scene. The following decade it attracted numerous folk music players and fans and various anti–war movements.

Greenwich Village is also known for the Washington Square Park, the heart and center of the district. Other notable attractions are the playgrounds like Thompson, Minetta and Desalvio Street. The Cage or West 4th Street Courts is also a great playground. It includes handball and basketball fields and it’s used by professional New York players.

This area is famous for its Village Halloween Parade. It was started in 1973 by Ralph Lee, a puppeteer and mask maker. It is organized annually on October 31st and features a pageant of pets, masqueraders, puppets, mummers, druggies, drag queens, drunkards and exhibitionists. There are more than 2 million visitors that come every year to admire this weird parade. Greenwich Village is the place where you can never get bored. The restaurants, clubs and cafés are always at your disposal.

If you think Greenwich Village is the perfect place for you, then you might want to look for a luxury apartment or condo in the area. If you just want to test the district, you can choose to stay at one of the numerous hotels. For loft living accommodations select the Mercer Hotel. For first class accommodations, you must go for the Washington Square Hotel. It also offers walking tours of the neighborhood. The Minetta Suites are another great option. This unique place is situated on a secluded and small side street. The residential building features rooms with kitchenettes equipped with espresso machines, refrigerators and microwave ovens.