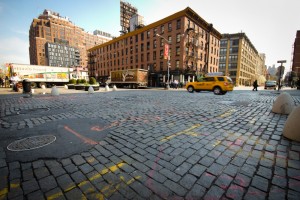 Meatpacking District luxury condos and apartments are located in lower Manhattan.  The district roughly runs north to south from West 14th St. to Gansevoort St.  From east to west, it goes from the Hudson River to Hudson St.  Some designations have it running north to West 16th St and east beyond Hudson St.

Development here dates back to the mid 19th Century.  Prior to that, it was the location of Fort Gansevort and part of Greenwich Village.  The expansion of New York City northward from the southern tip of Manhattan eventually overwhelmed the area.  The district retains an irregular pattern of streets which resulted from the merging of the Greenwich Village street layout with that imposed by the city of New York under the Commisioners’ Plan of 1811.  This strove to impose an orderly grid on the undeveloped portions of Manhattan.

Meatpacking district luxury condos and apartments occupy some of the original rowhouses that began being constructed here in the 1840’s.  Townhouses were also built, and many were later subdivided into tenements.  Some of these units have been renovated to include their original Greek Revival Style elements that were popular at the time.

Freight yards of the Hudson River Railroad replaced Fort Gansevoort in the mid 19th Century.  The district continued to develop as a mix of heavy industry and residential which had become unusual by that point with most areas of the city tending towards one or the other.

Places to See and Their Websites

The meatpacking district became steadily more densely packed with both industry and residences throughout the 19th and into the 20th century.  Elevated rail lines and subways meant higher volumes of freight and people could be readily shuttled in and out of this dense section of city.  The freight yards of the Hudson River Railway became an open air space for the buying and selling of regional produce starting in 1879.  Brick buildings on the river side of West St. were employed for the sale of meat, poultry, and dairy beginning in 1884.  250 slaughterhouses and packing plants were in operation here by 1900.  Since there removal the area has become increasingly popular for residential use as it has such a convenient location in lower Manhattan.