Posted on November 3, 2012 by TrueGotham Blog 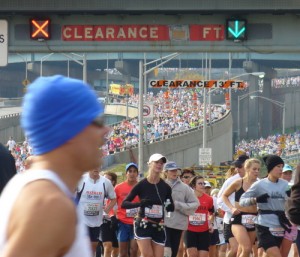 If you’re fond of jogging you will surely want to take part in the New York City Marathon on November 4, 2012. The first edition of the marathon took place in 1970 and it only featured 55 runners. Nowadays, the event brings together more than 35,000 athletes, 2 million spectators and thousands of volunteers. So, even though you are not in the best shape for running, you can stay on the side and cheer and encourage the marathoners. It will be a great experience. The marathon route is 26.2 miles long and runs through all 5 boroughs. The race will start in Staten Island and will end in Central Park, Manhattan.

The Opening Ceremony of the Marathon is the most expected event. It will feature the Fame Presentation Inaugural Hall and the Parade of Nations. These 2 shows were first introduced in 2011. The event is free and will take place on November 2, 2012, from 5.30 pm till 7 pm. This special event will feature a cultural parade showcasing the runners. It will be organized near the finish line of the marathon, in Central Park. The Opening Ceremony will be followed by an extraordinary fireworks show, the Marathon Fireworks. Another special event will be the Marathon Eve Dinner, on November 3, 2012, from 4 pm till 8 pm. The Dinner will be hosted at the Marathon Pavilion and will welcome runners and their family and friends. The tickets can be purchased from the ING Marathon Fitness and Health Expo.

The New York City Marathon will feature various start times depending on the categories. The Wheelchair Division for Women will start at 8.35 am and the Wheelchair Division for Men will begin at 8.30 am. The Five Borough Foot Locker Challenge will kick off at 8.45 am and the Select Ambulatory Athletes and the Handcycle Category will start at 8.55 am. The Professional women category is expected to start at 9.10 am and the Professional Men and Wave 1 will begin at 9.40 am. Wave 2 is going to start at 10.05 am, Wave 3 at 10.30 am and Wave 4 at 10.55 am.

This year, the New York City Marathon will be special because it will reunite the U.S. Olympic Team. The start line will feature all 3 male participants in the 2012 Olympic Games. Abdi Abdiraham and Ryan Hall couldn’t finish the Olympic Marathon in London and dropped out near the halfway point. Meb Keflezighi, the other American runner, finished 4th at the Olympics. The three of them have participated at the previous editions of the New York City Marathon, but this year they are in for more important cash prizes. Other important marathoners will be Ryan Vail, Jason Hartmann, Andrew Carlson, Scott Bauhs and Brett Gotcher.

The biggest prize is $100,000 and is going to be split between the first 5 female and first 5 male finishers. Additionally, each category features its own prizes and awards. This year, the total prize pursue for the winners is $853,000. In 2011, it was only $650,000. For the first time in 19 years, the Marathon will benefit from live TV coverage.