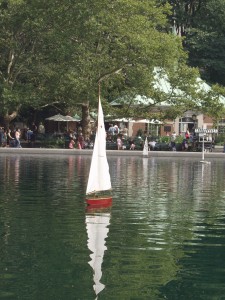 Central Park is a large public park located in the middle of Manhattan. This New York park originally opened in 1857 on 843 acres of land owned by the city. Frederick Law Olmsted and Calvert Vaux won a design contest in 1858 to expand and improve the park. The two also designed Prospect Park in Brooklyn. Their design for Central Park was called the Greensward Plan. Work on it continued through the Civil War until completion in 1873.

In 1962, Central Park was declared a National Historic Landmark. The park is managed through a non-profit agency, the Central Park Conservancy. The park’s northern end is West 110th St. 59th St. is the southern end. The western edge is 8th Ave., and 5th Ave. is the eastern edge.

Central Park is the most visited urban park in the U.S. receiving some 35 million visitors annually. It is a proximately 2.5 miles long and about .5 miles wide. It has served as a model for many other urban parks such as Vancouver’s Stanley Park, Tokyo’s Uenoe Park, and San Francisco’s Golden Gate Park.

Natural Appearance Part of the Design

While much of the park looks like natural land forms, it is almost entirely artificially landscaped. Its lakes and ponds were all created to look natural. There is an extensive system of walkways and bridle paths. The park contains two ice skating rinks, one of which is converted to a swimming pool in summer months. The park also contains a zoo, conservancy, wildlife sanctuary, large wooded area, and a 106 acres reservoir encircled by a running track.

“Shakespeare in the Park” is presented every summer at the Delacorte Theater. Other indoor attractions include the Swedish Marionette Theater, a historic Carousel, and the Belvedere Castle which houses a nature center. There are also seven major lawns or meadows, and several smaller grassy areas that are used for sports and relaxation. There are also a number of enclosed playgrounds for children.

Six miles of roadways are shared by skaters, bicyclists, joggers, and walkers. The real estate value of all this has been estimated at over half a trillion dollars.

The population of New York City quadrupled between 1821 and 1855. The only open spaces at the time where people could get away from the noise and congestion of the metropolis were found in cemeteries. William Cullen Bryant, editor of the Evening Post which later became the New York Post spearheaded the drive to create a great public park. Many influential New Yorkers agreed on the need for such a space.

In 1853, the New York State Legislature agreed to purchase a 700 acre tract comprising most of the park’s current land. $5 million was appropriated to purchase the land.

Olmstead’s Greensward Plan emphasized the project as “a democratic development of the highest significance.” It had an innovative design that called for “separate circulation” systems for use by pedestrians, horseback riders, and vehicles.

This entry was posted in Fun, Neighborhoods. Bookmark the permalink.