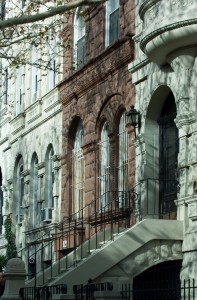 Sales of townhouses are seeing a boom.  According to recent reports, construction on new townhouses has increased significantly, nearing levels the country saw before the housing market slump.  Nonetheless, market share is still lower than what we’ve seen in years past.

Comparing year-to-year data, starts of townhouses are up.  During the second quarter of 2012, there were 17,000 starts, compared to 11,000 starts at this same time last year.  If we look at a moving average of one year, the current market share of townhouses is 11 percent of single family starts.  This is up from 10.4 percent during the first quarter of 2012.

The townhouse market saw its peak at the beginning of 2008, when market share was 14.6 percent.  This after a consistent rise during the 1990s.

Townhouses are seen as a higher-end housing alternative in Manhattan, and account for about 2 percent of total residential sales, which includes apartments.  Overall, sales of higher-end properties are faring better than other pockets of the market.

Experts believe that these increases point to an overall rebound in the market, and that progress is being made in the development market.  Developers are becoming more aggressive because of today’s credit and pricing, and they are eager to get a bigger return on their investment.

Townhouses are part of the luxury market, and some Manhattan properties are seeing sales in the tens of millions.  In 2010, the Upper West Side saw some of these incredible sales, including townhouses that sold for $19.4 million (26 West 76th Street), $18.9 million (22 West 75th Street), and $22.4 million (247 Central Park West).  Developers have taken note of these huge sales and are responding accordingly.  Other recent sales include a townhouse at 137 West 74th Street, that broke a sales record for a property not located on a Central Park block.

Buyers, especially foreign buyers, also feel the process of buying a townhouse is easier.  Typically there are no co-op boards to deal with and no microscopic evaluation of your financial records and history.

Experts believe that the spike in the market can mostly be attributed to developers, though.  Developers seem keen on being in the luxury market and are now converting multi-family townhouses into single-family units.  Townhouses on 115th, 121st, and 126th street on the west side of Park Avenue are seen as a prime location for this type of activity.

With all this data, one thing is clear – townhouses are becoming quite popular again.