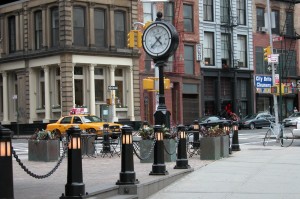 Downtown Manhattan is divided up into many smaller neighborhoods each of which has its own distinctive flair.  The names and the borders of these districts change over the years as the city evolves, and the character of places change.  SoHo and TriBeCa are two adjoining enclaves in the lower portion of the Manhattan which itself is one of the boroughs that make up New York City.  To make matters even more confusing, there are governmental bodies such as the port of New York which have altogether different boundaries from those defined by the city.

SoHo and TriBeCa are long developed portions of the city, and they have many historic structures.  The blocks south of Houston St. and north of Canal St. are home to a large number of cast iron buildings.  These date back to the late 19th Century when the area was an important receiving area for shipping.  Goods were unloaded at the nearby docks and hauled to large warehouses built of cast iron for temporary storage.  Many also served as factory space since there was a great deal of manufacturing going on at the time in the area.  A number of these cast iron structures have in more recent years been converted into loft apartments and studios.  These are much favored by artists who appreciate the large open spaces found within these units. 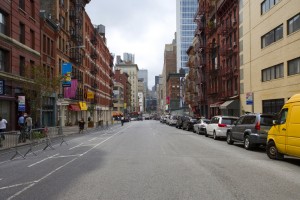 As befits the historic character of these two neighborhoods, SoHo and ATriBeCa are home to a number of museums devoted to important elements of this city’s development.  The New York City Fire Museum houses a collection of fire fighting equipment that dates back to the earliest period of the city’s growth when most of the apparatus had to be pulled by hand.  There are also examples of later stages of equipment when carts evolved into horse drawn pumps and then still later became motorized.  Altogether over 200 years of fire fighting in the city is documented.  The Museum of Comic and Cartoon Art promotes the understanding and appreciation of an art form that is likely the most popular in the world.  It hosts lectures, exhibits and special events that showcase the work of animators and cartoonists and explores the impact their work has had on art and culture over the years.

Both SoHo and TriBeCa are neighborhoods filled with shopping opportunities.  There are many specialty shops, and stores that sell all manner of imported goods.  This is a reflection of the highly cosmopolitan nature of these two locales.  This gets further reflected in the large number of ethnic restaurants where food from around the world may be sampled.

SoHo became renowned as an artist enclave before TriBeCa.  It had more of the cavernous warehouse space that proved so alluring to artists.  Walking tours are conducted in the region that allow people to visit some of these artists’ spaces to see how they blend work and living together in a loft lifestyle.  Because the location is so convenient and has so many attractions, SoHo also was first in becoming a highly desirable place for large numbers of people to want to live here.  That desire drove up rents.  The attraction of the loft space in SoHo was not just a matter of the ample size that they had, but a result of the space being available at low cost.  As rents began rising, a number of artist moved further downtown to TriBeCa.