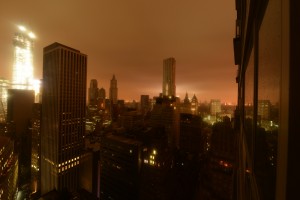 Downtown New York City was one of the main areas that was hardly hit by the destructive Hurricane Sandy. The once-fashionable and glitzy neighborhoods Battery Park City, TriBeCa and West Village that used to feature modern restaurants and chic boutiques, are now referred to as “SoPo”, short from “South of Power”.

Nevertheless, one of the most important questions remains the same, and it’s facing New York single every day. Is the hurricane stigma a short-time phenomena or it will persist in the long run too? Opinions are different, and what matters is that insurance costs are very likely to rise. Additionally, this is not the first time New York is facing adversity, and so far Lower Manhattan seems to recover just fine after the attacks that changed the look and history of the city forever. NYC gave developers permission to create a series of brand new residential estates, and prices for downtown proprieties have recovered incredibly fast considering the collapse in other parts of the city. As a matter of fact, median sales prices have gone up with 11.7% in the financial district.

However, another result of hurricane Sandy has lead to various inspections demanded by the banks. Several assessments were performed really fast and investors were eager to show that the constructions looked just fine; however, the situation was far from the truth. It’s really interesting the fact that newer buildings that are equipped much better and feature more luxurious amenities have been fortunate enough to be knocked out of commission for a longer period than older constructions.

What is more, some of the most expensive buildings in Lower Manhattan, such as Superior Ink- a building designed by Robert A. M. Stern- was significantly damaged and residents were forced to vacate the building. There are numerous reports mentioning that the city will probably need a couple of months to get back on its feet. It’s obvious that NYC was seriously affected by Hurricane Sandy. At this point, the biggest issues are related to the constructions, as most of them have suffered irreparable damages.

The electrical wiring and seawater corroded pipes are forcing residents to evacuate the building until further fixtures are being done. Reports are mentioning that it could take months for residents to be allowed to enter the Superior Ink. Several brokers believe it’s maddening to decide to place replacement equipment within the flooded area, highlighting that it’s wrong to assume a hurricane like Sandy won’t happen again.

Assumptions have been made and if insurance companies and lenders decide to get tough, the effects on prices may have a trickle-down outcome.  It’s certainly a fact that in Lower Manhattan the inventory is extremely low, particularly for high-end proprieties where wealthy buyers are always prepared to pay cash. There’s no denial that the real estate market is going through some tough times in New York City. Still, things are changing and visible improvements will only bring positive results in the near future. Experts are stating that if proprieties are well priced the people will want to invest again.