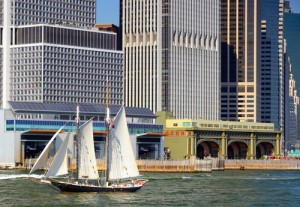 Financial district condos and luxury apartments are in high demand because of the incredible popularity the locale enjoys both as a place to live and to do business in.  The pace of life seems to move a bit faster here in this portion of Manhattan.  While traffic may move slowly on the congested streets, the pedestrians on the equally jammed sidewalks move at a brisk pace while about them bicycle messengers dart in and out from streets and sidewalks to rush their packages to destinations as quickly as possible.

The area has rebounded tremendously since the 9/11 attacks as the table below shows.

Describing the Place in Detail

New York City’s Financial District is in the southernmost portion of the borough of Manhattan.  It is the headquarters for many of the city’s renowned financial institutions such as the New York Stock Exchange and the Federal Reserve Bank of New York.  In addition, about 58,000 people live in the district.  The work day population swells to around 300,000.  Broad St. and Wall St. are at the heart of the district which lies south of City Hall Park down to the southern end of Manhattan.  Fulton St. marks the eastern edge and the Hudson River is the western boundary.

In the early 20th Century, the area was often called the Insurance District because of the large number of insurance firms headquartered there.  It also matches the boundaries of the New Amsterdam settlement that existed in the 17th century.

The first U.S. Capitol was located here.  George Washington was inaugurated at what is now the Federal Hall National Memorial at the corner of Nassau St. and Wall St.  Many
of the buildings in the area have been converted from office towers into condos and apartments to accommodate the growing residential population which has tripled in the last decade.

A number of tourist attractions have opened here in recent years such as the Museum of American Finance and the New York City Police Museum.  The traditional ticker tape parades down Broadway begin here at Bowling Green.  The route is sometimes referred to as the Canyon of Heroes because of the tall buildings that line the avenue.  The Museum of Jewish Heritage and the Skyscraper Museum are in adjacent Battery Park City.

Sometimes the district is simply called Wall St, but that term is more often applied to the financial operations that are located here.  Financial District condos and luxury apartments are coveted both by people who work in the area and visitors who admire the energy and attractions that abound here.