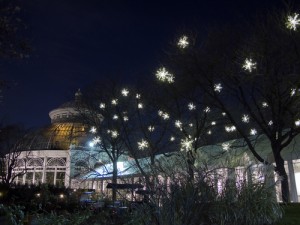 One of New Yorkers’ favorite traditions is the New York Botanical Garden Holiday Train Show. The event takes place every year and it’s a pleasure for both children and adults. The New York Botanical Garden will include 140 replicas of the most famous landmarks in the city and various holiday trains that will travel around them. Replicas such as the Brooklyn Bridge or the Statue of Liberty are manufactured from natural materials like twigs, leaves, bark and seeds. The exhibit is housed in the Enid Haupt Conservatory and it will certainly draw your attention.

This cherished tradition brings together individuals of all ages. They come to the New York Botanical Garden not only to admire the great show, but also to shop, drink hot chocolate, or eat lunch and gingersnaps, and walk around the garden. This year’s event will last from November 17, 2012 to January 13, 2013. Taking your kids during the holiday season to the Botanical Gardens to see the exhibition will surely make them want the most beautiful train as a Christmas gift.

The 140 replicas that symbolize iconic structures and buildings will be presented under hundreds of twinkling lights. The landmarks are crafted at Applie Imagination, by Paul Busse and his talented team. The natural materials used to craft the replicas are pine cones, bark, seeds, twigs, fruits and stems. Some of the most famous landmarks will be the Brooklyn Bridge, the Penn Station, the New York Public Library, the Yankee Stadium, St. Patrick’s Cathedral, and Radio City Music Hall. Since it is called the Holiday Train Show, the trains could not miss from this equation. Visitors will have the chance to admire large scale model trains that will travel through a quarter-mile of ground. The models will include trolleys, high-speed passenger trains, modern trains, streetcars and old American steam engines. The reflecting pool of the Conservatory will also feature cable cars. The children will love famous trains and locomotives like Tank Engine and Thomas. All these beautiful trains will travel past cascades and waterfalls, through tunnels, along overhead trestles and across rustic bridges.

The New York Botanical Garden Holiday Train Show also features the Artist’s Studio. This is a very popular event that shows how the models and replicas are manufactured. It also presents the models in various completion stages including the addition of the plants (radish seed lights or magnolia leaves roof shingles) and the structures’ framing.

The 2012 edition will also include new additions such as the Macy’s flagship location replica. Moreover, the Artist’s Studio will present a botanically inspired train and 2 trolleys. These models will travel on their own tracks. The Studio will also have replicas of international and national landmarks and sites like Boston Harbor Lighthouse, the Parthenon, Route 66 Diner and the Sphinx.

Don’t forget to take the children to the Gingerbread Adventures. Here, the little ones will have the opportunity to explore the various spices included in the gingerbread recipe. There will also be a gingerbread playhouse adorned with candies, frosting, and gingersnap cookies. Finally, don’t miss engaging representations like Bar Car Nights, Thomas and Friends, and various puppet shows.