NYC MUST SEE’s: The Statue of Liberty 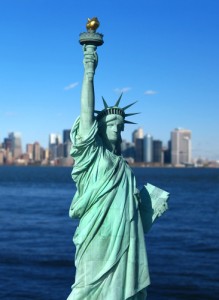 The history of this statue begins in 1876. The monument was designed and created by Auguste Bertholdi, a French sculptor. The United States received this statue as a gift from the French people in order to commemorate the centennial anniversary of the States. The monument is 46-meters or 151-feet tall and it sits on a granite pedestal. The pedestal is grounded on an abutment shaped as a star. The statue was finally completed in 1886 and on October, 1886 it was dedicated to the American people. In 1924, it became a National Monument. Throughout the years it remained one of the most powerful symbols of democracy and freedom.

The best way to explore the Statue of Liberty is by taking the stairs. The monument was recently renovated and now it’s more accessible for visitors. Still, people have to climb 393 stairs to get from the base up to the crown. However, the stairs are less steep and much safer than they used to be. Once they get to the crown, tourists will be impressed by the amazing views of New York’s skyline. People must know that access is limited to 240 persons per day, thus an advanced reservation is mandatory.