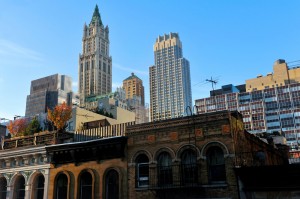 TriBeCa Has Some of the Highest Priced Property in NYC

Tribeca, which is also sometimes written as TriBeCa, is a New York City neighborhood located in lower Manhattan. The name is short for triangle below Canal St. The triangle is bordered by Canal St., West St., and Broadway. The Tribeca film festival is held here.

This zone was one of the first residential areas to be developed in New York back in the late 18th Century. By the middle of the 19th Century, it had grown into a commercial center with many stores and loft buildings. Broadway was the center of such development.

An extension of the IRT Broadway and 7th Ave. Line opened here in 1918 spurring further development. The extension of 7th Ave. and the widening of Varick St. also helped improve access. An elevated train line also used to run along Greenwich St., but it was demolished in 1940.

Tribeca’s industrial base had virtually vanished by the 1960’s. The large amounts of vacant commercial space led many artists to locate here in order to take advantage of the sizeable spaces available at low cost. It allowed them to afford spacious studios.

The Tribeca Open Artists Studio Tour was inaugurated in 1996. It was organized by a group of artists as a non profit group designed to empower artists who lived and worked in the district. It also served as an educational service for the public. It gave people free walking tours of artist’s studios allowing them to see how community artists lived and worked.

Tribeca was hit hard financially by the 9/11 terrorist attack, but government grants and various incentives helped the region to rebound more strongly than ever. The Tribeca Film Festival proved instrumental in the recovery. The festival also helped establish New York City as a major film making center.

Tribeca is now seen as one of the most fashionable places in New York City and for that matter in the country as a whole. The 10013 zip code found here was recently ranked by Forbes Magazine as the most expensive zip code in the city.

In the 70’s when SoHo established the legal right for artists to live in the place where they worked. Parts of the area then known as the Lower West Side sought the same privilege. A map of the district showed Lispenard St to contain a street that stuck out because of its triangular nature. The Petitioners therefore called their group the triangle Below Canal Block Association. They then shortened the name to the Tribeca Block Association.

This entry was posted in A Broker's Job, Fun, Market Insight. Bookmark the permalink.