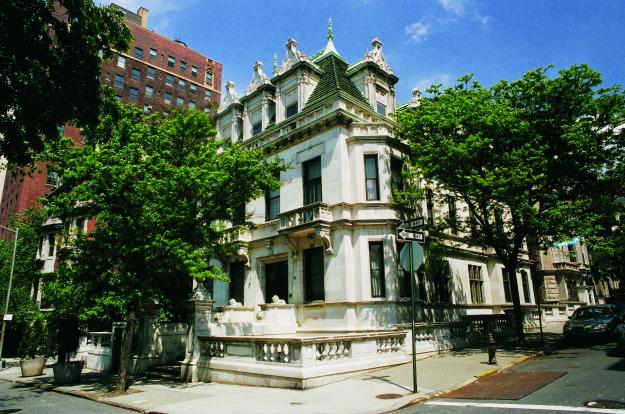 It seems that the long wait is over — the Schinasi Mansion at 351 Riverside St. has finally found a buyer. Of course, it took a long time (particularly seven long years) for it to be bought. And then there was the matter of price. Its original figure was $31 million, which was drastically cut to a paltry $13.5 million in the end. The reason: expensive renovations are needed for the house. Many of its woodwork pieces were distorted, and its ceilings were also crumbling.

Despite these setbacks, anyone will tell you that it was all worth it (especially for the buyer). The 12,000 square foot Schinasi Mansion is a fully-detached single-family residence in Manhattan designed in neo French-Renaissance style.  It was designed by William Tuthill, the same architect who also did the Carnegie Hall.

This elegant house is situated on the west side of Manhattan, which is sits directly across Riverside Park. The surrounding neighborhood is filled with residential townhouses and apartment buildings, and if you go north, you’ll find Columbia University. You can also find the historic rowhouses and townhouses built between 1889 and 1902.

The house was commissioned by Morris Schinasi, a poor, Turkish immigrant who borrowed $25,000 from a friend to get to the U.S. He brought with him a cigarette-rolling machine he designed, which he later presented at the 1883 Columbian Exposition held in Chicago. This was a novel idea, because until this point, cigarettes were hand-rolled individually.

Soon after, his brother joined him in New York, and they created the Schinasi Brothers Company. His success led him to select William Tuthill to design the mansion. However, rumor has it that they didn’t see eye-to-eye on many things. In the end, Schinasi was not happy with the work and never paid Tuthill for his services. Tuthill will later sue Schinasi for a sum of $5655.65.

When Schinasi died at the age of 71, his heirs sold the house to Semple Realty Corporation for $200,000.  It served as a finishing school for rich young ladies, and was run by Mr. Semple. Columbia University bought the mansion when Mrs. Semple died in 1956, and was turned into a daycare center known as “The Children’s Mansion.” Columbia then sold the mansion in 1979 to Law Professor Hans Smit and his wife for $325,000, and the couple later initiated an interior restoration that took 20 years to finish.

This mysterious, yet highly independent mansion showcases Egyptian carved maple, hand-carved woods, white marbles, and painted frescoes. You can also find unique pineapple motifs repeated throughout the house’s design, which are symbols of hospitality. If you’re into curious oddballs, then the house boasts of an original tunnel that leads underground to the Hudson River. No one knows exactly why it was included in the house.

One unusual feature of the mansion is that it’s totally offset from all four sides, which makes it fully detached from other neighboring structures. It is the biggest single-family residence alongside Riverside Drive, taking up two typical New York City lots. All four facades of the building are have different treatments, making it look different in various angles.

The Schinasi Mansion is considered a New York City landmark. According to the Landmarks Preservation Commission, it had special character and aesthetic interest that makes it a part of New York City’s cultural heritage.