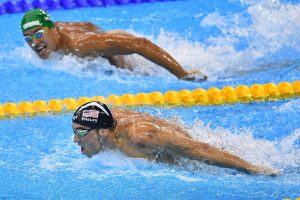 Occasionally I have a novel idea that I share through my blogging. This is not one of those times. As part of our continued efforts to support our agents at CORE, our marketing, PR and management team meet with individual agents regularly to discuss business development and marketing strategies in a very bespoke fashion. Yesterday at one of these meetings, one of my sales managers (full disclosure that he is also my best friend), David Innocenzi made the analogy between distraction among real estate agents and the competition between Michael Phelps and Chad Le Clos. Needless to say, Michael Phelps has proven that his laser focused efforts both in preparation for and competing among a world class group of swimmers results in winning. Alternatively, Le Clos has spent a great deal of his time both in and out of the pool preoccupied with Phelps even gazing at him during the actual race. Didn’t work so well for him in the end.

I’m not suggesting for one moment that real estate agents should be given gold medals (maybe some should) nor that we all can’t continue to learn from one another, but it has been my experience that the real estate agent who maintains laser focus on their customers throughout a transaction, from the first meeting through the closing, is indeed worth their weight in gold! I’m sure Le Clos is learning always from his observations of Phelps. But when an agent or even a brokerage firm becomes so preoccupied with what another is doing, the distraction becomes a liability and everyone in the transaction pays the price.